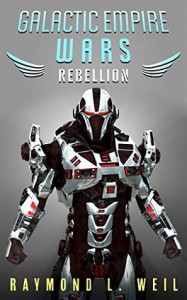 Raymond L. Weil is definitely on my top ten list of authors. This book is another book from him that I enjoyed a lot. It continues the Galactic Empire Wars story about six years from when the last book ended. Again we are treated to some fairly plausible science fiction, some great action both on the ground and in space and a bunch of enjoyable characters.

There are not so much political nonsense in this book which is perhaps not so surprising given how they dealt with the useless career politicians in the last book (I still wish we could do that for real, especially with the useless EU oxygen wasters). Not that there was much in the previous book either which for me is a positive thing.

However, another snake have entered the garden in the form of the usual you are not real people, your are inferior to us nonsense towards the clones that have and are being created to man the fleet and army the humans need to survive. I cannot say that I liked those parts very much. Not only do I find the entire discussion old, boring and stupid in general but it is downright frustrating to read about people who are so totally brain damaged that they, for no good reason whatsoever, just pisses on the warriors that stands between them and the annihilation of the human race.

Apart from those annoying parts this is a great book. With the Strell out of the picture things are again looking grim for the human survivors. However, as in the other books in the series, the Kleese are about to find out that they might actually not be the biggest bad asses around any more. This is another thing that I like with these books. The humans might be taking a beating from time to time but they do have a habit of kicking alien butt more often than not. So much that the Kleese warrior cast starts to get a bit of grumbling respect for the humans.

Again I am looking forward to the next book in the series. If all the various technologies from the advanced races that the Kleese tries to roll over ends up in an alliance between the (remaining) nonaligned worlds and the humans then it is clobber time indeed!