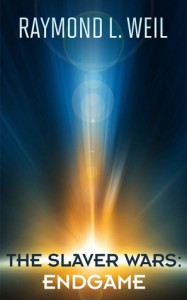 I have thoroughly enjoyed all the books in this book series. They have all been great as far as I am concerned possibly with the exception of Alien Contact which was “just” good instead of great. This is the 5th book in the actual Slaver Wars series. Originally the author wrote three short stories, the Moon Wreck series. Later these books was renamed into Slaver Wars, book 1, part 1 to 3, and later a 4th book, Fleet Academy, in the Moon Wreck series came out which was also kind of incorporated into the Slave Wars series from and that point of view this is book 7. Since the two series are quite separate in time I prefer to keep them separate so to me this is book 5.

Anyway, enough of the trivia. This is a good ending to a great series. As the book name suggests this is the big showdown. Not only against the Hocklyns but also, and perhaps more importantly, against the AIs. The book pretty much follows the same recipe as the previous books and plays out the reminder of the story arc in a logical way. All the familiar characters are there. The combat in space is plentiful and well done. The fleet battles, especially towards the end, are quite large yet they are not glossed over as some books have the unfortunate tendency to do. Nor are they so detailed that they dominate the book.

The method used by Admiral Streth to bring down the Hocklyn Empire was not really what I expected. However, if you think about it, it was actually a very logical approach and certainly not a new idea. The AIs got a more straightforward clobbertime treatment. I have to say that I had a wee bit of a problem with how the Federation went about things at the end. The Hocklyns were intelligent after all yet not a single attempt to enlighten them about the big picture was taken. After all, those resources that now simply got squandered could have been useful against the AIs. Ever since the AIs grand project was even hinted at I almost assumed that, at some point in time, the Hocklyns would be turned against the AIs but that not even an attempt was made felt very illogical to me.

As I wrote above this is the end of the series. The author does leave a few loose ends with future books could be tied into and he does indeed hint, both at the end of the book and on his website, that a spin off series could be in the works. Given how much I have enjoyed other books from this author (not just this particular book series) I will pick up such a book if it comes out for sure.